In SAS, a library engine is an engine that accesses groups of files and puts them into a logical form for processing. The engine used by default is the base engine. In addition, you may come across other engines, such as the SPD engine.

The SAS Scalable Performance Data Engine (SPD Engine) provides parallel I/O as each SAS dataset is split over multiple disks. The structure of this engine allows a faster processing of large data.

A common production set-up may define different libraries with different purposes, and therefore different engines. A library with the base engine may be used for ad-hoc reporting and small data transformation, while the library with the SPD engine may be used to store a large data mart. From a user’s perspective, the layer provided by the SAS meta-data server hides the underlying engines used by the various libraries. It is however useful to validate the type of engine being used without relying on the IT department.

An easy way to do so is to run a proc contents on a dataset stored in the library of interest. The section related to the “Engine/Host Dependent Information” may provide some clues on which engine is used. In the example below, the first screenshot is related to a base engine hosted on a Linux machine. It provides in particular the underlying file name. On the other hand, the second screenshot provides information related to the Access Control List (ACL) based security system, which is the model used by default by SPD. Notice also the indication of whether or not the dataset is clustered. It is again another clue to establish the type of the engine being used as clustering is a unique capability from SPD. 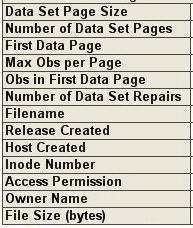