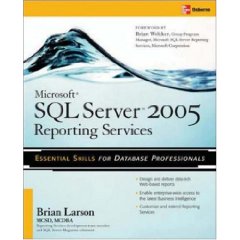 The book is divided into three parts. All the examples are based on the Galaxy database, a fictional inter-galactic delivery service. The first version of the book was based on the sample database coming with SQL Server 2005, Adventure Works, but it seems that it was worth to develop a new sample database for the new edition of the book. But, it can make the TSQL queries a little bit harder to understand.

The first chapters give you an overview of the architecture of the reporting tool, the installation, and the different options of deployment. It is enough for a solution architect to get a clear view of the components, but will probably fall short for a system administrator. Just for the record, the author states on p. 29 that the Report Builder is available only in the Enterprise version of SQL Server, which is not correct: the Standard Edition allows the use of the Report Builder as well.

The second part focuses on building the reports. The author goes through the wizards first, the basic reports from scratch, and finally advanced reporting. This part is where the value of the book lays. Each chapter guides us through the creation of reports from beginning to end. On average, the reader will be exposed to five to seven reports each chapter. Each report covers a specific set of functionalities in SSRS. By the end of the second part, you should know all the functionalities available in the Report Designer, and this is a good feeling.

The reader needs to be in front of the computer, because the book goes through all the steps to create the reports. At the end of each report built under the supervision of the author, there is a debriefing section called task notes which outlines the functionalities and tricks used for this report.

Being guided through the report step by step is fine at the beginning, but starts to be repetitive as most of the steps are atomic and repeated over and over. Count on having 50 steps on average for each report built. Some of the steps are about configuring the visual look of the report which is very frustrating from a developer perspective. On the other hand, this book may be perfect not for DBAs or developers, but the business users. All the steps are thoroughly explained and it is difficult to go off-track. Offer this book to your customer, and you will teach them how to fish their own advanced reports.

The last part focuses on the Report Manager, the built-in website which is used to deploy and distribute the reports. Similarly to the second part, all the functionalities are covered through exercises. It is a part worth reading for people in charge of deploying and distributing reports. Report Manager is quite advanced in term of authorization and configuration, and could therefore be used as a front-end application for small-sized projects. The last chapter of the book focuses on the available options to integrate reports seamlessly with existing applications.

Finally, appendixes cover the report definition language and the web service interface of the Report manager. These types of reference annexes are a good way to increase artificially the size of the book, and do not offer a terrific value. However, the last annex is about Report Builder, the Ad Hoc reporting tool for Power Users who do not have Report Designer and Visual Studio installed on their machine.
The author goes also through the creation of the Report Model which is be the only type of data source that Report Builder can use.

I recommend this book for people wanted to author reports and deploys them. DBAs and developers may find the book to be a little bit slow, but they will get a good value by going through all the exercises.